With the amount of rain KZN and South Africa has had over the last week, fishing has not slowed down! Keen anglers across the board have been hunting for their fish to open their 2017 account, and many succeeding. There have been excellent catches along the coast from our Rock and Surf anglers and Ski Boat anglers alike. Unfortunately the weekend did not play the game even though we witnessed a large numbers of guys fishing. 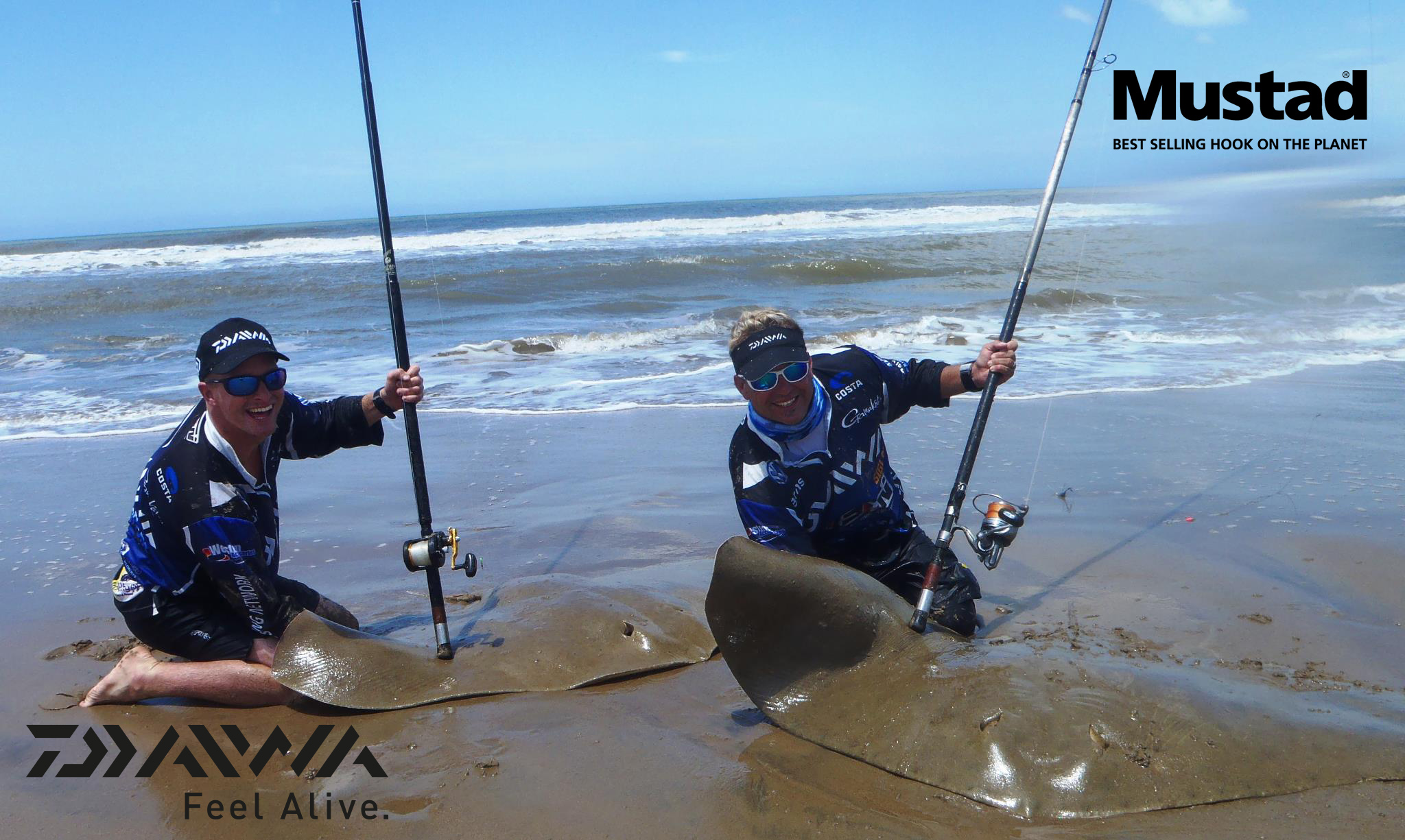 This week has not been for the faint hearted as anglers braved strong winds and heavy rains to attempt good fish. The North Coast has produced some flat fish such as Diamonds, Honeycombs and the odd Thorn Tail Ray, all these fish being caught on a big Mackerel bait. There have been lots of peckers around so keeping your bait on the hook for long enough has been a challenge but it does allow you to have a decent chance of getting a big fish.

South of Cape Vidal there have been reports of Sand Sharks /Guitar Fish coming out, but nothing huge, most sitting in the 10-15kg range.

The Ballito area has been producing Grey Sharks as usual, mostly on fresh Mackerel and Red Eye baits, which unfortunately is very scarce at the moment. There have been plenty of Shad, Stumpies and other Reef fish around as these fish never tend to disappear.

Durban has been below average when producing flatfish, anglers are still waiting for the Diamond Ray smashes that normally arrive mid-January. There have been a few Shad coming out but all undersize and few and far between. There have been a lot of Grunter around being spotted by our Spearos, but they don’t seem to be taking anything you throw at them.

Toti and Warner Beach has been producing a ton of Shad at the moment. The water in this area has a nice colour to it and the sea has been quite flat, seducing the flatfish to come closer into shore but the lower South Coast has been producing some nice fish.

Port St Johns is still producing Hammer Head Sharks on any bait; the bigger fish have been coming out on whole slid Chokka baits. Port St Johns South has been productive for our spinners as there have been a few King Fish, Kob and plenty of Shad coming out on spoon and dropshot, the water is incredibly clean down there at the moment so the McArthy Chrystella colour should work fantastically for the Kob and Kingies. There have been some really nice Yellow Tail coming out around the Hole in the Wall area and anglers are having excellent fun with these fish. 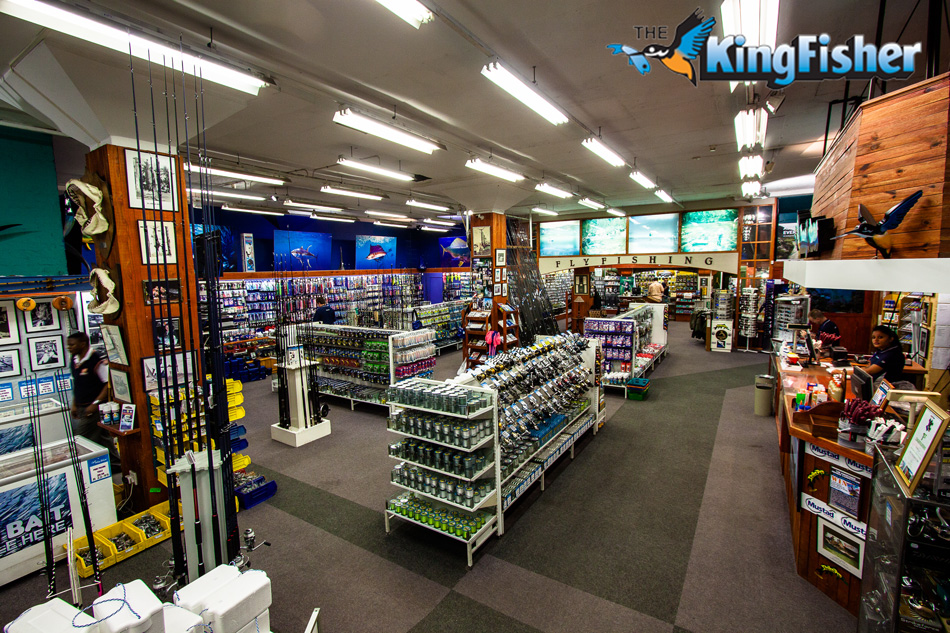 Thanks to the big seas, many anglers opted to stay in bed and enjoy the sunrise from home, those who didn’t and launched at Vetchies, were in for a rude awakening when they got past the Harbour mouth. Seas like this can be very unpredictable as it may seem flat from the beach, but as soon as you get past the protected area you will see what the sea is really doing. There were only two or three days maximum on which anglers would have been able to launch in most areas, which resulted in very few reports from our entire coast.

The boats up on the North Coast managed to boat a few Dorado and Wahoo, and some decent Natal Snoek for the anglers who stayed shallow. The stretch between Tinley Manor and Blue Lagoon produced some large Snoek on small spoons and on fillet traces. Red Eye fillets have been king, with a pink or live glow dusters in the dirty water, also in this dirty water, anglers are urged to trawl slower than usual, allowing the bait to be located easily. Anglers fishing for Snoek are using the lightest of light tackle, with most anglers using 10lb braid, a 7ft medium rod and a 2500 size grinder.

Umhlanga produced some nice Tuna, with Paddle Ski anglers having a blast with the Dorado and Tuna, but many anglers were not up to the challenge.  Durban had a few reports of Tuna in the shallows and Dorado out deeper near the ships. South Coast anglers had better luck and saw a good amount of Yellowtail being caught on live baits on bottom rigs. The usual catches of Tuna were seen at the Shoal and off the Banks. Some good bottom fishing was reported off the South Coast over the weekend, proving that there are some excellent Cracker and Steenbras around.

The Harbour has been fishing well lately for the light tackle bait and artificial guys with everything from Grunter to Cuttlefish jumping onto what we offer them. Along the Yacht Moll there are still a few Kingfish around on artificial lures. Early morning seems to be the best time to attempt this using poppers and surface lures. There have been plenty of smaller Stumpies coming out at the moment as well as Grunter. These fish can’t leave the Cracker Shrimp alone but often they peck the bait right off the hook, so baby Squid will definitely be the best bet. For better results, grab some boots and wade the banks around the channel, this is where the bigger fish die but also where you may encounter those of the toothy kind.

If you do decide to wade the banks, keep an eye on the tide as to not get stuck out on the banks, as often the only way back to the grass areas is through deeper channels and this can prove difficult if you have not given yourself enough time to get back. Fishing on the boat, there have been some decent Grunter coming out on Cracker. These fish are excellent fighters but your tackle need not be heavy, a simple 10lb trace line, a number 6 hook and a 6’6” rod and 2000 size grinder to match is the weapons you will need for this fight. The Grunters mouth is very soft and this is the reason why we use such light tackle, you do not want to pull that fish too hard or you will tear the hook out. There have also been a few Malabar Rock Cod coming out around the walls and under the ships, these fish are taking full baby Squid on circle hooks, these hooks are used for an easy release. Anglers walking the banks on the Wilsons Warf area have been reporting serious amounts of Brown Rays taking their baits, mainly Cracker Shrimp, unfortunately the anglers fishing these areas are not using very heavy tackle and are either getting stripped or pulling the hook. 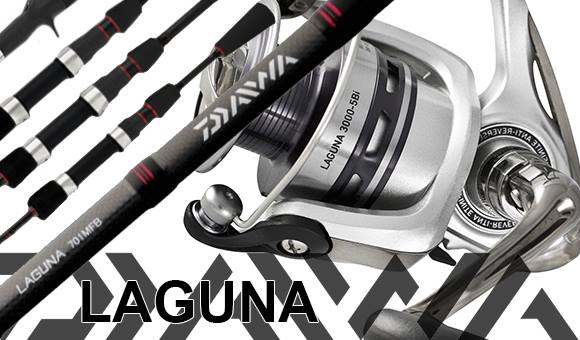 Hazelmere seems to be the number one spot for big Bass at the moment, with the dam higher than it has been in months, anglers have been having an absolute blast fishing for those big Bass hiding in the reeds and sunken grass, the water is very clean in some areas and the McArthy Wazza colour seems to be working very well. There is definitely a good chance of you hooking up with one of these 3kg plus fish that are exploring the new areas and eating whatever you put in front of them.

Inanda is also producing some good fish. The new Lucky John lures seem to be out performing the rest in this dam, the number one advantage these lures have on their competitors is the embedded scent in the lure, you will notice as you open the packet and truly see for yourself that this does make a difference.

Nagle Dam is also producing some good fish, but Shongweni still seems to be a no go zone with no reports over the last week. With the weather being the way it has been, you are looking to make as much noise and movement in the water as possible, this is where the spinner bait and buzz bait really comes into its own. Overcast and rainy conditions is perfect to use these baits as you will break the rhythm of the rain hitting the water, these baits mimic distressed Birds, Rats, Frogs or any other non-fish prey that Bass love to eat. The blades on a spinner bait are used to catch whatever light they can and make an almost under water disco to attract as many fish as possible. The funny thing with spinner baits is that you often will get enquiries not only from Bass but from the odd Tilapia as well.

The last week has been trying for our Carp guys, with most of the holiday makers having gone back to their respective Provinces, our dams have slowly gone back to normal and the bigger fish have started to come to play again.

Nagle Dam is producing some good fish at the moment on the Spicier flavours such as Pumpkin spice, but other flavours are working as well. I have had a few guys coming to me telling me that you can go to any dam in KZN and use the Double Trouble boilie dip paired with a number 4 hook and Banana Floaties and you will be guaranteed a decent fish. Inanda has filled up quite a bit so it is no longer a long walk from the campsites to your rods by the edge of the dam. There have been a few good Carp coming out on specimen tackle as well as conventional, but conventional is definitely the winner at this dam with the sheer numbers of fish that have been caught.

Shongweni is still a no go zone but a few of my local anglers have been telling me that the downtime for Shongweni is doing the Carp well, as catches are becoming more frequent and the fish are slowly getting bigger. Albert Falls is producing some really good fish at the moment for anglers fishing the sweeter baits; the Super Cast SVB is the ground feed to use. If you make your own ground feed, to get a head of the game, use crushed egg shells to make yourself a protein Carp feed. This feed is said to keep the fish around the feeding area for much longer, increasing your chances of the fish picking up your bait.